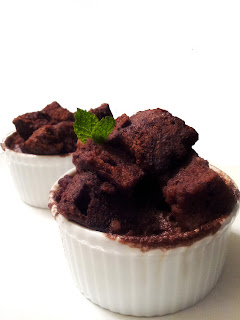 This recipe is actually two in one. First, a recipe for deliciously moist banana bread with pecans. Second, a recipe for chocolate bread pudding USING the banana bread. It's slightly outrageous but I won't apologize!

This recipe makes 2 loaves of banana bread, but the bread pudding only uses one. Keep one for breakfast and use the other for dessert. Ahhh, it's like everything in this world is falling into place.

Preheat the oven to 350. Grease 2-9" loaf pans.
Whip the bananas until smooth and light in color, 3-4 minutes. Add the almond milk and vinegar and mix. Add the oil, maple syrup and vanilla. Whip for 2 minutes.
Add the flour, sugars, cinnamon, baking soda and salt. Mix to combine and fold in the pecans.
Divide the batter among the two loaf pans and bake for 30-40 minutes or until a toothpick inserted in the middle comes out clean.

Preheat the oven to 325.Grease a 9" loaf pan or 4 individual ramekins.
In a blender, combine the milk, sugar, cocoa, cinnamon and banana. Blend until smooth.
Pour over the diced banana bread and let soak for 15 minutes.
Pack the soaked bread into the ramekins and fill any remaining spaces with the milk batter.
Place the ramekins in a large casserole dish and fill the dish with 1" of hot water. Cover the dish with foil and pierce a hole in the center to allow steam to escape.
Bake for 40 minutes, remove the foil and bake 10 minutes more.
I like to eat bread pudding warm, but some people enjoy it cold as well. Garnish with chocolate shavings and dig in.
Posted by aPHoM at 6:57 PM