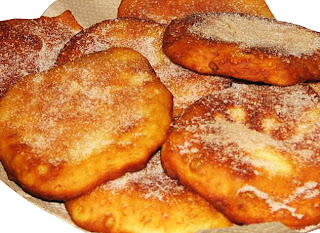 In my opinion, there aren't many downsides to being vegan, especially now a days where vegan food is abundant and growing bigger everyday. If I had one complaint it would be that carnivals and county fairs are far less entertaining when you can't eat all of the disgustingly awful for you fair food. IE funnel cakes, caramel apples and so on. It's actually a blessing in disguise, but when you are in the heat of the moment, watching your non-vegan friends scarf down giant pieces of fried dough there is only one thing to do. Make it yourself.

Fit a mixer with a dough hook.
In the bowl combine the milk and melted butter. Mix to combine.
Add the sugar, yeast and flour. Mix into a ball. Add the salt.
Knead on medium-low speed until the dough is smooth and only slightly sticky, about 5-6 minutes.
Place is a greased bowl and cover. Let rise in a warm place for 1 hour or until the dough has doubled in volume.
I like to turn my oven on low and place the bowl on top of the range for enough heat to allow gentle rising.
Divide the dough into 12-3 oz balls, about the size of a golf ball.
Preheat a deep pot of oil to 350. Combine the cinnamon with 1 cup of sugar and set aside.
Press each ball of dough out into a flat shape about 1/4" thick, 3-4 inches wide. Drop a few ears in at once, be sure not to overcrowd the pot. Fry until golden brown and puffy on both sides, about 5-6 minutes.
Right out of the oil, dust fully in cinnamon and sugar.
Serve immediatly.
Posted by aPHoM at 5:55 PM